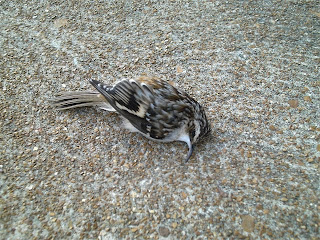 For a brief moment I had sympathy for the taxidermist. I understood the desire to try to preserve the beauty of something dead that was once alive. In this case, a photograph would suffice, as I am not in the habit of walking down the street collecting dead animals by the roadside.

I remember my girlfriend at the time thinking that this was a grim picture. She didn’t at all see the picture the way I saw it. I tried to excitedly explain to her the matching of the birds feathers to the granules in the sidewalk and how it’s carcass was beautiful because it was unscathed, but all she saw was a picture of a dead bird. I dropped the subject. I guess it’s all a matter of perspective.

I’ve always envied birds since I was a little kid. I always thought, “It would be so cool to have wings and be able to fly. “ It wasn’t just the flight…you can do that in an airplane, but to have these beautiful wings and fly and have the wind hit your face. Sure there is hang-gliding but that still isn’t having wings attached to your body and it isn’t half as pleasing to the eyes. I find the idea of being an angel appealing to say the least. Imagine the money you would save on traveling. 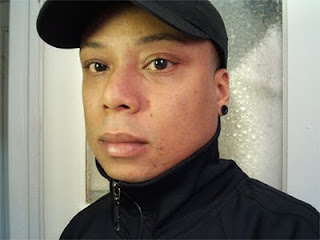 Below is footage of an impromptu show I did with Apollo Heights on January 16, 2010, @ Ella Lounge in New York City. This is a new track called “Aftertaste”. Essentially it’s about a girl cheating on her boyfriend and kissing said boyfriend with the taste of another man in her mouth (that’s the PG version).

Ella Lounge has a really tiny stage and bringing drums coupled with not having a sound engineer was just a bad idea. The band was flexible and agreed with me on choosing the sound over aesthetics. My role in Apollo Heights is not just as a drummer, but also as a producer, so my main concern is always what’s going to make us sound the best live. The tracks for the live show come from various sources and to date the audio levels are inconsistent from track to track (I’m working on fixing that). All this to explain why you don’t see me playing drums in the video, but instead you will catch an occasional glimpse of me behind my laptop running the tracks in Ableton Live and doubling as sound engineer for the band.

After Taste - Apollo Heights from delano franklin on Vimeo.