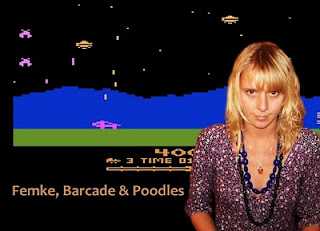 < The woman in the picture above is Femke Berkhout. I met Femke at Don Pedro’s on New Years Eve in Brooklyn. She’s the bass player for the band the Hoa Hoa’s (pronounced Wa Wa’s) from Canada. We played on the same bill as I was sitting in on drums with the band Apollo Heights. As the Apollo Heights set ended, we rang in the New Year of 2010. Soon afterwards, I found myself outside of the venue picking confetti off my clothes and staring at the champagne stains on my shoes. I look up from my shoes and Femke comes walking out of the venue. She compliments me on my drumming, gives me a light peck on the lips and wishes me happy New Year. I tell Femke, “Happy New Year” and she gives me this amazing hug. It was one of those long, sincere hugs. I almost didn’t want to let her go. Actually…I didn’t let her go. I threw my arm around her waist and she threw one of her arms around my shoulders. We just stood there for a moment and then she went in because she was going on stage soon. When she left, I said to the girl standing next to me, “Man, what a nice girl.” Of course Femke’s nice. She’s Dutch. European girls are nice like 99.9% of time (at least that’s been my experience).

Femke’s hug was awesome not just because it was sincere, but because I needed it and got it without asking for it. I must’ve looked like I needed a hug. Maybe she looked at me and thought, “Damn, he needs a hug”. You go into a bar in New York and say, “I need a hug” and it’s highly likely that some girl will call security on you. So if you need a hug, you keep it to yourself. 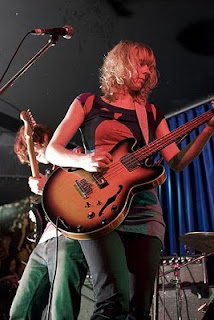 I was nervous about seeing the Hoa Hoa’s. I’d never seen or heard them before and usually when you meet someone in a band that is really nice, like Femke, the band sucks ass. This happened to me twice already in the city. I’ll meet a really nice girl before she goes on stage and then I hear her band and they stink up the place. Unfortunately, I’ve dated women that played in suck-ass bands and I can safely say that I would rather date an accountant. Dating a girl in a band that sucks is hard because you can only come up with so many excuses to miss her next gig.

When Femke picked up her bass and started playing I was relieved. I was pleasantly surprised by not only the fact that she could play her bass well, but also by the fact that her band sounded really good. People started dancing and getting into the music and Femke had this amazing stage presence. I thought, “Man, I could marry a woman like that. Look at her…that scheisse is so hot.”


I didn’t get a chance to compliment Femke on her playing skills or thank her for the awesome first hug of 2010 or propose to her like I wanted to. Danny Chavis of Apollo Heights came staggering in and informed me that the party train was pulling out of the Brooklyn station and heading to the city. I looked at Femke on stage and she was knee-deep in “rocking out”. It was one of those moments that you don’t interrupt, so I just left without saying goodbye. 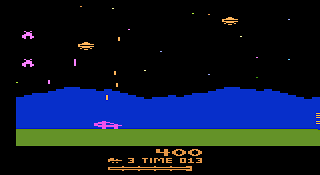 I usually don’t plug bars, not even the ones I DJ at (like Sweet Revenge), but I have to plug Barcade. Danny Chavis took me there recently and when I walked in for the first time I just stood there and smiled for a moment. Who needs a woman when you have all of these old-school ficken video games? They had Donkey Kong, Moon Patrol, Rampage, Berserk, Asteroids, Ms. Pac-Man and many more… I thought I was going to cry with joy as I turned to my right and saw a bar with a decent beer list …and …gasp…it was Happy Hour!

Barcade is the type of place in Brooklyn that guys drag their girlfriends to when the girl is trying to marry him. It’s like the final testing ground for future wives. If she can put up with you getting drunk and playing 25-year-old video games and pretend to be having a good time herself…she’s pretty much in. You can go to the tuxedo shop and get fitted the next day. If she goes with you and is having a genuine good time then you just book a flight to Vegas and marry her that night.

The best part about Barcade though is that you can totally go by yourself and geek out and have a blast. You can get drunk and Donkey Kong yourself to death and not even notice that there are hot women in the bar (which surprisingly there were when I was there).

I think the highlight of the night was sitting at the bar with Danny having a drink and looking across the bar and seeing a poodle sitting at the bar with us. At first the poodle growled at me and then her master told her to cut it out. I joked with Danny, “It must be one of those anti-black guy dogs. It IS a white poodle”. The dog’s master didn’t share my sense of humor. Oddly enough, after my joke the dog stop growling and just laid her head on the bar looking bored while watching sports on TV. Danny said, “That dog looks the way that I feel” and then he ordered another round of drinks.

Now when someone asks me what I’ve been up to I can say, “Lusting after Dutch bass players, playing ancient video games, and drinking at the bar with dogs”. Ha-Ha, Danny and I kicked it with a poodle.