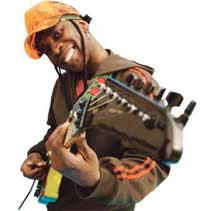 One of the highest peaks of my year of peaks and valleys that the rest of the world is calling “The Year 2009” was working with Vernon Reid on his multimedia piece titled Artificial Afrika. Originally I had just come on the project as an assistant film editor to help Vernon get the piece finished on time while he simultaneously prepared for a tour and record release with Living Colour. I was fortunate enough to have Vernon also bring me on for the live performance to do some experimental electronic music. Below is a link to a live audio recording of the show on WYNC. It’s a long one, so you might want to make sure that you have about an hour to kill to get into it.