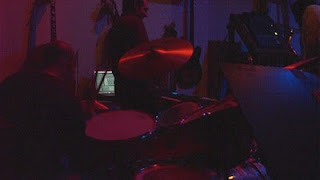 Last week, April 23, 2010, I played drums with the band Puppet. Puppet is an experimental jazz solo project by saxophonist/keyboard player Micah Gaugh. I met Micah in the late 90’s in NYC while we were both hired guns on the downtown NYC experimental jazz scene. Micah also plays keyboards in the band Apollo Heights that I play drums for.

With the rapid gentrification of New York, experimental music is a hard sell these days. What was once an experimental music haven in NYC is now a vapid playground for Hipster kids with out of state origins. To find a spot where you can play some stimulating experimental jazz music (the Williamsburg Music Center) was a treat.
In the band was Micah Gaugh on vox and saxophone, Andre Lassalle on guitar, Leon Gruenbaum on Keyboards and myself on drums. Below is a small clip of me playing at the gig. I just put a small camera in a corner so you can only see the Leon’s, which are Leon Gruenbaum and I.

A male friend called me recently and said that his girlfriend was “getting all serious” on him and talking about marriage. Then came the question, “Leon, how do you know if she’s the right one?” I get this question a lot and I can’t for the life of me figure out why people ask me instead of going to a priest or something. I told him what I tell everybody else, “If she’s the right one, you won’t have to ask anyone if she’s the right one. When you look across the room at her, do you feel lucky to be with her?” He was quiet for a moment. I didn’t mean to, but I laughed. He laughed too. “You don’t think I should marry her, do you?” he said. I knew better than to fall for that one. I wasn’t about to tell him not to marry her and have her hunting me down to kill me. “I’m not telling you either way. I’m just saying that you should feel it if it’s right.”

My friend’s issue was pressed because his time was up so to speak. He and his girlfriend had been together for several years and she was pretty much giving him the ultimatum. I have my share of ex-girlfriends that hate me because I opted out on the “marry me or beat it” option and I feel it’s better to be true to myself than waste someone’s time with an inevitable divorce. And that’s all the “L” is going to say about that.

Love honestly and everything else falls together. The questioning of love is always sketchy.
Email Post