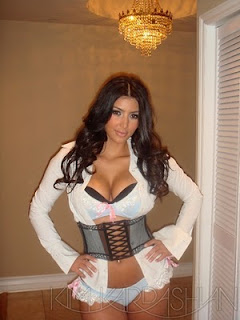 Not long ago, I was talking to a friend and he was jabbering on, "Blah, blah, blah Kim Kardashian".
Me - "Who?"
Him - "You know...Kim Kardashian!"
Me - "Did she go to school with us?"
Him -"No, fool!  You know...form TV?"
Me - "Umm...no...not exactly.  Oh, wait...TV?  Cardassians...aren't they the aliens on Star Trek?"
Him -"No, super-nerd.  That's not even spelled the same.  You know...reality TV?  Sex tape?"
Me - "I don't...wait.  Back up.  Did you say sex tape?  What does she do?  I mean...why should I care that she has a sex tape?"
Him - "She doen't DO anything.  She's just rich and hot and makes sex tapes and dates a lot of famous dudes."
Me -"...and she's famous for that?"
Him - "How do you call yourself in the entertainment industry and you don't know celebrities?  Her dad like defended O.J. or something like that."
Me - "Did you say 'defended' or 'offended'?  I know about people that actually do stuff like act or direct or compose.  I don't see how being rich and making amateur porn makes you a celebrity.   There are women like that in every city in America.  What's the name of her show again?"
Him - "Didn't we just talk about a TV show the other day?  So I know you watch TV."
Me - "Hulu.  I hardly ever watch TV offline."
Him - "Offline?  You are such a weirdo"
Me - "Sounds like a celebrity for drones"
Him - "What?"
Me - "Drones.  You know...people that work 9-5 and fantasize about how the other half lives.  Vicarious indulgence.
Him - "Oh, stop being so uppity.  It's a conversation starter."
Me - "So is the subject of using binary code to cheat on your spouse.  What's your point?"
Him - "Forget it."
Touch-Free Screens.  I own a touch-screen phone, but yet I am still not a huge fan of touch screens.  I like touch-screens enough when they work, but long for buttons when they don't: which explains why I have a touch-screen phone that also has a Qwerty keyboard for peace of mind.  All of this just to lead into a conversation about the iPad.  A friend has one and I messed around with it for a bit.  I could only see an attraction for using it with music software in live situations.  I adhered to the idea of using an iPad in a live situation even more so when I saw the video below exhibiting an attachment that makes the iPad hands-free.  Observe.

Reasons this could be cool.

2.  Being able to eat greasy, cardiac arrest causing food while scrolling through YouTube videos without the fear of smudging your precious screen.

3.  Running one of my software sequencers with ease while sitting behind a set of drums (while simultaneously worrying that a mere wave of my drumsticks would turn the sequencer off in mid-sequence unintentionally)

4.  Touch-free DJ sets (once again, risky.  Some drunkard could come up and with a wave of a hand ruin your mix)

5.  Hugely increasing the re-sale value of your iPad by having it be literally hardly ever touched.


As the year comes to an end, it's time for the great serpent of life to shed it's skin once again in the name of growth.  Happy holidays and safe travels to all.