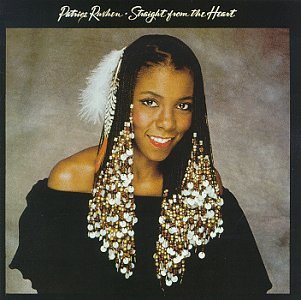 While sorting through and updating music crates (both real and virtual), I came across my favorite track by Patrice Rushen titled "Remind Me".  Listening to the track instantly took my mind back to the post-pubescent, statutory Leon years.  I remember my boyhood fantasies of marrying Patrice Rushen while I would sit and listen to her records on vinyl.  This fantasy would lead to me chasing a girl that looked a lot like Patrice Rushen as she appeared on the album cover of Straight From the Heart.  I can't remember the girl's name and the only reason I remember her at all is because of her unique (at the time) rejection.  As I desperately threw out more game than Xbox 360, the girl broke it down in a quick and simple way.  I was the polar opposite of her type.  She liked tall, chocolate, athletic boys.  I was short, light-skinned and a band geek that neither liked or played sports.  I joked with her, "So...if I were taller and played basketball would you date me?"
Girl - Nope.
Me - Why not?
Girl - I told you...I don't like light-skinned guys.
Me - Would you date a Mexican?
Girl - What?  Why, you Mexican?
Me - Nah, I'm just curious.
Girl - Boy, you stupid.  Get away from me.
This girl stuck in my memory for being the first girl to not give me her number because of my skin tone.  I figured that my height was the main issue because I was used to girls not being interested because I was short, but she told me that my skin tone was a bigger deal than my height.  She even went as far to say, "If you were darker, you might be able to win me over but you a lil' too high yellow for my taste."
This girl was surely no Patrice Rushen.  What made Patrice Rushen hot to me as a kid wasn't just her face, it was her talent.  She was the real deal...could play multiple instruments, compose, sing... the whole nine yards.  Fantasizing about dating Rushen was raising the bar insanely high.  At the end of the day, I wound up shifting my energy to a hi-yella female Saxophone player that lived down the street.  Below is the track Remind Me.
What Skin Is In?

Finding the Patrice  Rushen  track also reminded me of an element of growing up that I thought faded with age...light or dark skin being "in" or "out" amongst other black people.  I wrongfully assumed that this was a kid's thing and that adults didn't participate in such self-loathing silliness.  I was wrong.
Last night, I was watching a reality show that featured two black men in a verbal confrontation.  When the lighter skinned black man half-jokingly implied that he was handsome to the darker skinned black man, the darker man commented, "Naw, light skin ain't in right now".
Huh?  Where is this information coming from?  Is there a self-loathing black person e-mail list that you get on and they tell you which skin tone to hate on via e-mail?  I've been hearing the "verdict" (as I like to call it) a lot lately.  I often hear it on TV and in conversations on the street and on Facebook.
I don't understand what happens when your skin tone is "not in".  Am I not allowed to go to certain clubs?  Will women find me less desirable?  Will I have the hours adjusted on my ghetto pass?  Will the police "catch and release" when I get pulled over?  Will I not get invited to the coolest parties?
Of course, I'm joking.  I'm far removed from the world of skin being "in" or "out".  My world is all good  people and bad people.  Every now and then I will meet someone that insists that I'm "not black enough"    for their taste, but I'm always quick to note that they probably don't have any taste to begin with if it's an issue.
LL
Email Post