BEEF
One of my favorite cult films of all time is the Brian De Palma film Phantom of the Paradise (1974).  In the realm of originality, there isn’t much in this film.  Basically the film is an amalgamation of Faust, Dorian Gray and Phantom of the Opera sprinkled with jabs at the recording industry and 70’s theatrical Rock groups.  To give you a taste of the latter, below are lyrics and a movie clip of…Beef.
Life At Last (lyrics) Phantom of the Paradise
Life at last
salutations from the other side
I can see that you're the devil's pride
Do you realize that all of you donated
something horrible You hated that is part of you
I'm your nightmares comin' true
I am your crime
Life at last
sit and listen while the fun begins
Hearts are broken and the bad guys win
Sit and listen all the cutting up is easy
And this isn't for the queasy or the weak of heart
You had better start for home while there's still time
I'm the evil that you created
gettin' horny and damned frustrated
Bored stiff and I want me a woman now
I'm the evil that you created
gettin' horny and damned frustrated
Each of you must stop and try me
all of you might satisfy me

If you were not entertained by the lyrics and clip above then I have bad new for you; you have no sense of humor. 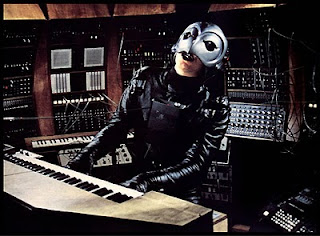 When the Phantom of the Paradise trailer rolled across TV screens I was just an impressionable five years old.  I remember thinking that the Phantom and his synthesizer rig were the coolest things that I had ever seen.  At that point in time, I had no idea that I was a musician or even what a musician was.  Unbeknownst to me was the fact that I was getting a small glimpse of my own future.   It would be several years later before I actually viewed the film and fell in love with the real star of the film…TONTO.  As both a kid and an adult I remember thinking to myself, “I want one of those!” 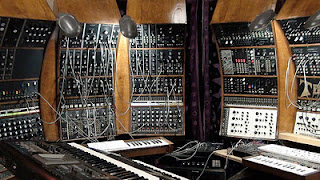 TONTO
TONTO stands for The Original New Timbral Orchestra .  TONTO is the amazing looking series of curved towers filled with racks of electronic gear behind the Phantom in the film as he composes music.  Many people grew up with TONTO and are completely unaware of the fact.  If you are a Stevie Wonder fan…you know TONTO.  Observe the video below.