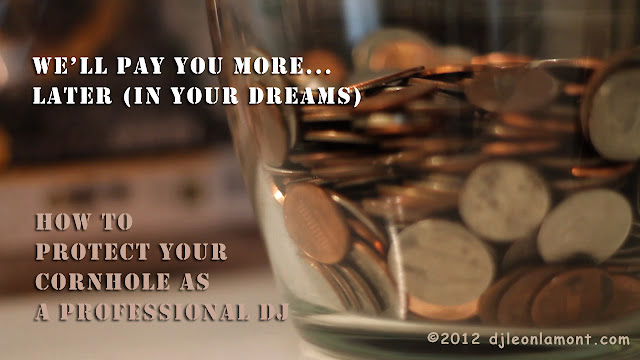 This past St. Patrick’s Day weekend, a DJ friend called and asked if I could sub for him on a gig.  Since I was already booked, I couldn’t do the gig for him.  As I tried to think of another DJ that might be able to help him out, I asked how much the gig paid.  I was shocked by how low the number was.  Since my friend has been in the bar/club industry for years, I couldn’t resist asking, “Why did you accept such a low number?”  My friend was in a rough spot when approached about the gig and unfortunately the venue knew it.  They pulled the old gag, “We’ll pay you more later if things pick up.”   My friend is no chump and he knew it was a lie the minute it came out of the person’s mouth.  Considering my friend’s situation (needing cash and committing to a residency)…the numbers were low but manageable.

The problem on my end with finding a sub for my friend was that all of my DJ associates would consider it an insult to ask them to sub for so little money on a holiday weekend.  What’s the point of telling this story?  When you lowball yourself you are pretty much on your own.  There is another very important point to this story for new DJs: never believe a club owner that says they are going to pay you more later.  They never do.  They never have.  They never will.  I fell for this gag when I first started out as a DJ and learned the hard way that this is the proverbial smoke up the ass.  Whatever number you get at the beginning of the gig is the number you will end up with at the end of the gig, so make sure you can sleep at night with that number.


I don’t care if it’s your friend, a relative or the love of your life.  They are not going to “pay you more later”.  “Later” is an imaginary place where unicorns frolic in the grass and dragons fly through the sky with huge smiles on their faces.  You know this place?  Of course you don’t…because it doesn’t exist.  Misery doesn’t love company.  If I can save a music lover from being duped and give them information to help them protect their corn hole…I’ll do it.  Every time you go into negotiations with a club owner, they are after your corn hole where there is a string from it attached to your dignity.  They want the hole, the string, the dignity, the whole nine yards.  Am I being a little over the top?  Maybe, but trust me…there is no exception to this rule.  “Later” will never come.
Email Post