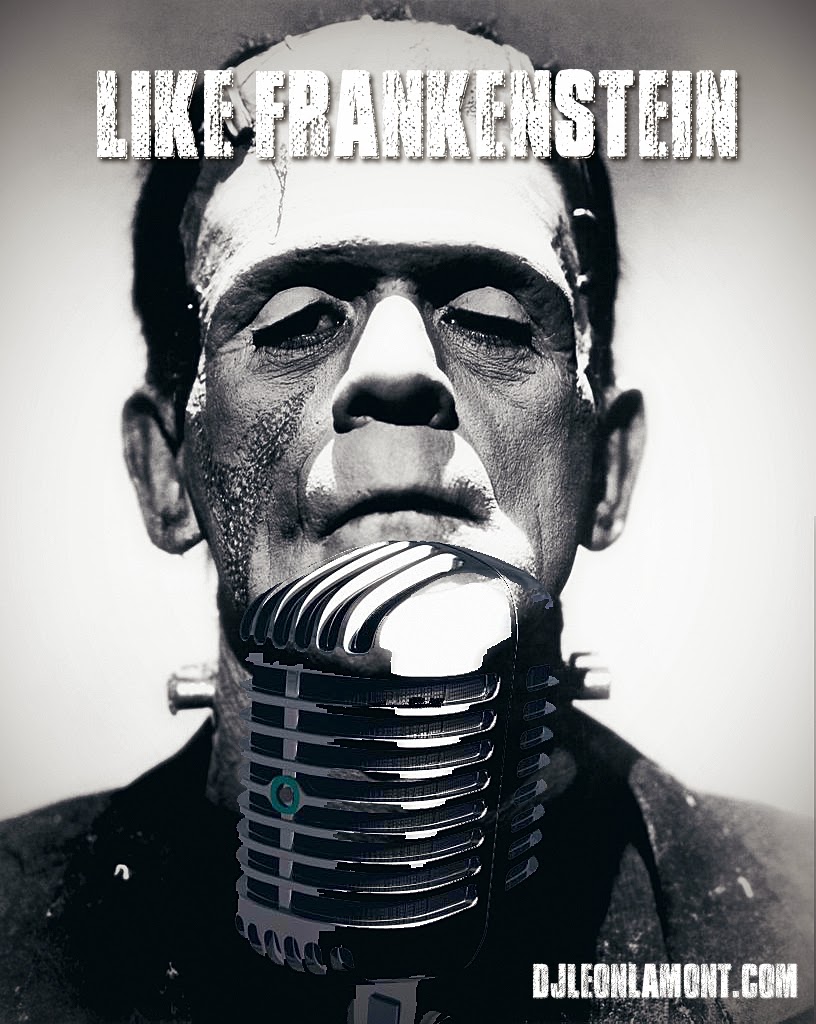 One of the things in my life that made me sympathetic to the foibles and frustrations of the fictional character, Dr. Frankenstein, was my rock band in the early 90's.  I had a concise idea of what I wanted it to be and how I wanted it to sound and it turned out to be something completely different.  You have this thing that is an abomination of your original idea…an odd beast that has run amok.

Not unlike the first Frankenstein monster, you start a band by pulling all of these different people into one entity all mismatched and crudely stitched together and you add electricity to it to bring it to life.  Something is unfinished or goes wrong and you try to make do with a temporary part, not knowing that the temporary part will become permanent.  Such was the case with my band not being able to find a vocalist.  I underestimated the difficulty of what seemed like a simple task.  My impatience got the better of me and I took on the task of vocalist myself while simultaneously playing drums.  I found the experience of playing drums and doing vocals at the same time horrid but made myself OK with it under the belief that it was a temporary fix.  I quickly discovered that my standards for good vocals were much higher than a room full angst filled teenagers.  Screaming my guts out while sitting behind a kit of drums seemed to suit the audience just fine.  My disappointment in this discovery was immeasurable.   It was like digging ditches until you could find a better job…only to discover that there wasn't a better job available.  At least not for you.

You learn the hard way that every idea isn't a good one and that every plan doesn't work.  You're humbled by a room full of strangers as they unanimously decide what is good and what is bad from the assortment of things you've created. Suddenly the monster is too strong to be killed…or more accurately…too well loved for you to get away with murdering it.  You become accustomed to the monster's ugly face and try to tame it with fire.  Yet, it's not a monster…it's your vocals...it's your band.  You took on a job you didn't want (being a vocalist) and now you're stuck with it.  What you thought was a temporary fix turned into a permanent burden that you dragged to New York City into a recording studio after you committed to doing it with ink on paper after being offered a modest recording contract.  Your imagination wasn't as good as you thought because you never imagined it going this far.   You laugh at yourself after the eighth hour of standing in front of a microphone in an east coast studio while remembering yourself saying years beforehand, "I'll just do it for now until we find someone else".  Joke's on you, smart guy.  The engineer hits the talk button, "OK, Dr. Frankenstein, the producer wants you to do another take with the monster".

The recording comes out, you tour, you read the various criticisms in magazines from the US and Europe.  Somehow you manage to agree with things both negative and positive said about you in the press.  The life of the record ends, the phone rings and the record label is asking for demos of the next record.  You can never stop writing…you can never stop creating.  You see the request for a new recording as an opportunity to right a wrong.  You suggest getting a new vocalist.  You try to win the label over with demos featuring a new vocalist.  The label rejects them.  The record label makes it clear…they didn't sign a new vocalist…they signed you…and that's what they wanted.  You write, cut 4-track demos, cut demos in friends' studios, stop by the post office, mail demos to NYC…this repeats and goes on for weeks.  Then quite suddenly…everything starts to go wrong.  Band member disputes, girlfriend issues, losing the producer, budget problems with the label…all resulting in the band breaking up.  It was over.  The villagers chased the monster into the towering windmill and set the windmill on fire as the monster watched in horror from the highest window.  Dr. Frankenstein watched from afar…not in the least bit discouraged, he goes back to the lab still itching in the ass to create.  He creates and sleeps with ease because he's fine with the facts that every idea isn't good and every plan doesn't work.