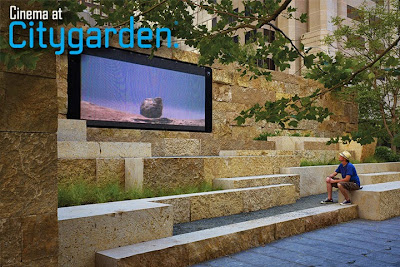 A couple of months ago, while working on a short film for a local St. Louis film contest, I was questioned by a friend, "How do you continue to create stuff and not get discouraged?"  I responded, "I don't understand the question."  My friend explained how he had never won anything in his entire life and just pretty much gave up trying years ago when it comes to creative competitions.  I explained to him, "Oh, that's simple.  Sometimes I win."  The only type of competitions that I have not and will not participate in are battle of the bands.  In my youth, I was groomed to believe that battle of the bands competitions were beneath me.  I don't know where I got the idea, but it sticks to me like flypaper.

Competitions aren't just about winning for me…they are an excuse for me to create something (not that I really need one).  With video, even though there are places like Vimeo and YouTube to post your work, it's a different vibe and energy to be judged by and screened among your peers in a competitive setting.  Then there is the number one motivator in the world; prize money.  Not winning, placing or even having your work acknowledged has a different tone when you're experienced with winning.  If I had the experience of competing for years and never winning anything maybe I would have the same attitude as my friend and just get discouraged by the mere mention of a competition requiring my creative input.  I would like to believe differently because I get so much more out of creating art than just the hopes of receiving awards and checks.

The latest competition I was in was a film contest called Cinema at Citygarden.  There were three top winning positions with cash and awards.  I finished in the "better- luck -next- time-but- we'll- screen- your- movie- in- the- Citygarden" slot.  While winning is always nice, the most I'd hoped for in the competition was to at least get a wall screening during the exhibit at the garden.  Apparently that was a reasonable wish to request from he universe and my film submission will screen on the wall of the Citygarden along with the winners and other selected submissions.  My short is called "Litter Hater" and is an experimental piece about my annoyance with people throwing trash on the ground (especially right near trash cans).

For St. Louis residents that are interesting in seeing the films, the program will debut on Citygarden's video wall on Friday, May 22, 2015.  The videos will play on a loop from 6PM - 11PM  daily and continue at Citygarden through the end of June.