When it comes to musical influences, I have a vast lexicon of artists to pull from.  Included in that lexicon is Lemmy of Motorhead fame and David Bowie of, well, just fame.  I had heard rumors from people on the East Coast that Bowie wasn’t doing well as I had heard that Lemmy wasn’t doing too hot either from people on the West Coast.  I didn’t know how serious the rumors were until this week. 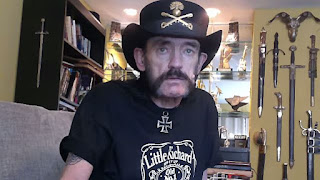 When I discovered Motorhead I was a 19 year old, black kid sitting in the living room with insomnia, drinking beer and watching MTV’s Headbangers Ball while my fiancé slept in the next room.  Just when I thought I would nod off, the video for Ace of Spades hit the screen and my eyes widened and my jaw dropped.  I slowly moved from the couch and dropped to my knees in front the TV screen and just stared in awe.  I mumble two words; “Holy shit”.  I fell in love with Motorhead instantly.  Truth told, these days, only two Motorhead songs really exist for me; Ace of Spades and Iron Fist.  The two are almost the same song, but I don’t care because I never get tired of listening to either.  The speed, the dirt, the grunge, the scratchy scream-like vocals, I borrowed it all and threw it into my own rock band.  I could smell the filth through the screen and I was truly inspired.

I don’t even know where to start with David Bowie.  I remember digging his music on the radio as a kid before I even knew who he was.  It wasn’t until the 1980s, in my teens, that I became a conscious fan of David Bowie and upon further digging realized that I had been a fan all along and didn’t know it.  As a kid, I heard things I liked on the radio and never really thought much about whom the artist was or how to acquire the tracks.  When puberty struck, music was much more important and I had to know what everything was that entered my ears.  MTV made discovering new music a dream and within that dream I became a lifelong David Bowie fan.  All I can say now is that I am grateful that he dropped the one last release I’ve been waiting for him to do for a long time before leaving Earth and that his death feels like losing a relative or close friend.