AFTER COVID-19 IS OVER, CHECK OUT DAVE & THEM 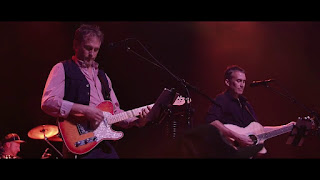 Many moons ago, I was hanging out in St. Louis, MO with a bunch of musician friends that I’ve known since I was a teenager.  We were all sitting around talking about various music projects that we were all working on, when my friend, Dave, says to the group, “Hey, I have this new cover band project that I’m putting together, but I’m having trouble coming up with a name for the project”.  Long story shortened, one man’s joke is another man’s band name.  I said to Dave, “You should just name the band Dave & Them”.  We all laughed, but at the end of the night, Dave decided to turn my joke into the name of his cover band project.

Dave & Them’s gag is that you can go to a show and pretty much request any song and they will digitally dig up the tune and site read it to the best of their ability.  Of course, the band has core tunes from an insanely huge catalogue of music that they play as to not have a bumpy night in its entirety, but the audience gets to have fun challenging the band to do a  Dave & Them version of audience requested songs.

When Dave and I where in our teens and early 20s, we would often do gigs together as hired gun musicians in a cover band (Dave on guitar and myself on drums) with an employer that would exploit the fact that we could read music, thus causing us to do minimum rehearsals and maximum chart reading (sometimes not getting the music charts until the day of the gig).  I guess Dave had the foresight to capitalize on the experience we shared with that employer and create the concept for Dave & Them.  If he’s really in a bind, Dave calls me to do a gig on drums every blue moon, but having rotating musicians under the ubiquitous moniker “Them” is pretty solid (and a good business move) so he hardly needs my help.  To make his project more bullet proof, Dave has an acoustic version of the bad and a full version of the band.  Band to loud?  Then the band shrinks and still gets the gig.

If you’re in the STL area after COVID-19 clears up and see the name Dave & Them, you should stop in and check it out and tell them Leon Lamont sent you.  Their gigs are usually in venues where you can eat, drink, be merry and have a good time (and a majority of the time there’s no cover).