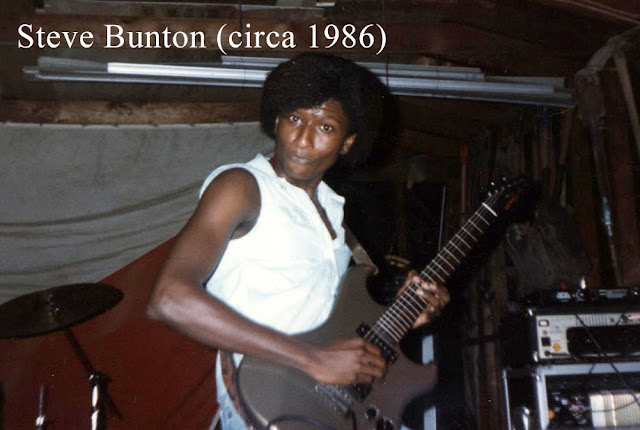 When you listen to the 2003 release titled One Call Away by St. Louis native rapper, Chingy, you will hear Steve Bunton on guitar.  One Call Away became a number one hit on the Hot Rap Songs chart for three weeks and peaked at numbers 3 and 6 on the  Hot R&B/Hip-Hop Songs and Mainstream Top 40.

Anyone worth mentioning on the St. Louis music scene in the 1990s and early 2000s knew Steve Bunton from his various cover band gigs with bands like Dr. Zhivegas and Trixie Delight as well as from his local St. Louis rock band T.H.U.G.S., that was popular in the 90s.

T.H.U.G.S., was the band that Steve and I started together in high school, but our friendship started at Normandy Junior High School in the 80s.  I was walking pass the door of the school band room and heard someone playing this amazing guitar solo on top of a not-so-hot band.  There was a very thin line between arrogance and confidence with me in my teens and so I just flat out told Steve Bunton, “You’re great, but your band is terrible.  You should play with my band.  We’re better musicians and we already have paid gigs lined up.”  Steve’s first impression of me was that I was a “Snobby asshole that insulted his friends” (which I still, to this day, don’t apologize for.  It’s a lifestyle choice), so he declined my offer.

I kept bugging Steve over several days until finally I said to him, “Look, just come by my house and jam once.  If you think I’m a lousy drummer then I won’t bother you ever again.  Either way it’s a win.  If you don’t like my playing, at least you won’t have to worry about me stopping by bugging you every day.  If you do like my playing we can start doing gigs and making money immediately, we even have a booking agent”.

After our first jam, Steve and I were practically joined at the hip.  We jammed some rock tunes, some RNB, some funk…a little bit of everything.  Steve laughed and said, “Oh, wow man.  I just thought you were this stuck up bass player cat in the orchestra, but you’re allright though”.   In high school, we went on to play marching drums side by side in parade marching band together, played in the orchestra together, did field marching band competitions, jazz competitions, cover bands of various styles, original bands, it was non-stop music from 6am (marching band rehearsal time) until bedtime.

My friendship with Steve Bunton lasted for over two decades and some of my proudest musical achievements were shared with Steve, so I could write pages upon pages about him, but I’ll spare the reader and get to the point of this blog.  Steve Bunton died on August 27, 2008, and the anniversary of his  death is in a couple of days.  Writing this blog helps me deal with what feels like twelve years of perpetual grieving.  Yeah, that’s over a decade ago, but when you love someone, time will fly by and it still feels like they died just days ago.  The week before Steve died, we were plotting and scheming another original band project to do together.  Steve died the day we were supposed to have our first practice for the new project.

Becoming friends with Steve Bunton in my teens was the most amazing, life altering music event in my life.  I met a lot of great musicians and people of all walks of life because of Steve, his talents and the many gigs we did together.  It is impossible to come anywhere even close to replacing a person like Steve in my life, I don’t even try.  Instead of trying to fill that void of Steve Bunton being gone, I make it a point to remember how great of a musician he was and how great he made other musicians around him; especially me.

Later and don’t be a hater